This summer, students are abuzz and active in Harlem, and Young Audiences New York (YANY) is making sure it stays that way! YANY staff members have been working to ensure their students are receiving quality out-of-school time enrichment, especially during the summer months when learning loss is a pressing reality.
Summer learning loss is a major contributor to the learning gap between lower and higher income youth. Studies show that while the gaps in learning remain relatively equal during the school year, they significantly increase during the summer. Low income students lose two to three months of reading exposure each year compared to their more affluent counterparts. By fifth grade, this learning gap can potentially increase up to three years for the lower income students.
Recognizing the severity of this problem, YANY is working to close this gap with special programs underway at 10 summer program sites in NYC funded by the Department of Youth and Community Development. Each program runs two to three days a week for up to three hours, offering a range of art forms from dance to digital media.
YANY is focusing their efforts on Harlem, one of NYC’s lowest standing neighborhoods on the socioeconomic ladder. This summer YANY partnered with the Police Athletic League (PAL) to offer a summer program to engage students in a variety of art classes.
Miss Navida is a YANY teaching artist who is also a professional classical musician, actor and storytelling guru. She is as vivacious as her fiery red hair and she brings every ounce of this, along with her professional skill, to her lessons with the students.
Before Miss Navida even entered the classroom, the students hummed and snapped their fingers while singing the refrain to one of the songs they had learned the past week - “I have fingers, I have toes,” and when she arrived they welcomed her with a spirited, “Miss Navida!”
She commended the students and said, “You guys are impressive, practicing our song!”
Immediately, she activated the classroom with a “name-game” song. While singing their classmates’ names, students passed around a Native American buffalo drum on which they played a tribal beat.
With this simple musical activity, the students touched on several vital lessons. First, they emphasized the importance of culture and community in the classroom by discussing the origination of the buffalo drum and passing the drum around to establish a cohesive group setting. Additionally, by singing and keeping the beat, the students learned musical concepts of rhythm and percussion.
With 30 years of experience as a teaching artist, Miss Navida uses key points in her lesson plans such as expanding skills in literacy, characterization, and overall social skills.
“We’re trying to teach the students all the skills that allow us to ride the subway and not get into fist fights,” she said.
All children greatly benefit from activities that help them to follow directions, recognize their own space, listen and be respectful. She accomplishes this through a multi-disciplinary approach where she combines the use of music, movement and storytelling.
Miss Navida’s techniques were also evident later on when the students helped re-tell the ancient African folktale of the giant Abiyoyo. Initially, Miss Navida prompted the class to help her recite the story they had read the week before and they eagerly did by raising their hands and taking turns.
Then the students stood and acted out various characterizations of the giant in the story. As the teaching artist thumped out a monstrous tune on her keyboard each student leapt from right foot to left with their arms raised, imitating the ferocious manner of the giant.
Some students began to excitedly sing the Abiyoyo song but Miss Navida reminded them, “Remember no voices! We will get to that at the end of the song.” Though she appreciated the enthusiasm the children had for the activity, she knows it is important to keep the lesson structured so that the students have the opportunity to develop their social learning skills.
The engaging summer program created by YANY and PAL is only possible when there is funding available. YANY is fortunate to have a strong relationship with Marsh & McLennan, a company that has provided support for both family workshops and other similar arts integration programs. This summer, volunteers from Marsh & McLennan also had the opportunity to participate in two summer learning residency programs at PAL.
During their visits, volunteers pretended to be alligators, chickens and even giants to engage with the youth. They clapped and sang along with each class and they were amazed by the teaching artists’ impact on the students. They experienced firsthand how summer learning programs are not only beneficial, but vital to closing the learning gap.
Getting back-to-school is not as daunting for NYC’s kids who have taken part in summer programs with YANY as it has been in the past. YANY is optimistic that they can continue to expand their efforts in improving out-of-school time enrichment and making summer time programs accessible for all NYC students!
Contributed by Sophie Pauline, Young Audiences Arts for Learning Communications Intern 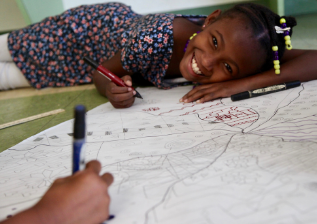